Last time, I was able to get the Oculus Rift DK2 to run on the Raspberry Pi 3, including the head tracking. However, the first interactions showed that it’s cumbersome to work with the desktop (since it’s not distributed on the two eyes but really is using the LCD as one screen) and also to use the keyboard.

Also, in the context of making the Oculus mobile and untethered, it is necessary to have a camera onboard, at least, until I get the XTtion to work. It is interesting that it is not too easy to find software that simply can display a video stream from a local webcam, most blogs just describe how to stream from a remote webcam or make a local USB cam accessible via some webservice.

My last attempt to get a stereo analog cam to work was not really cool since the latencies on a PC plus some weird display software as an .exe were not the ideal setting to really improve things.

So after some research, I found a git repository for streaming a local webcam to a dedicated  view, independent from the desktop. You need to install CMake and libbsd-dev to make it run via:

Also, I was able to install the camera in a nice position without additional mechanics: 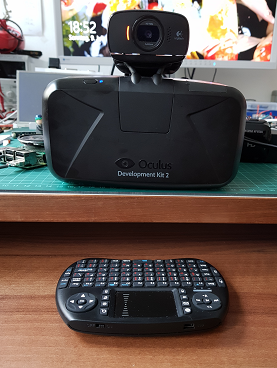 cam fits nicely the cables of the Rift and enough space on the straps to lead cables.

Here’s the video walk through with some live feed to see the latency:

Next, I may try to either position the video on one eye, or even double the stream to both eyes. Or I may try to use the Minoru Stereo cam that I’ve been working on last year.

Oculus Rift DK2 on a Raspberry Pi3: towards untethered VR.