current discussions are revolving around when and not whether ai will supercede us human beings. i learned the following lesson: we need to slaughter for them first! it’s about batteries, power!

after my last research on different options to power the raspberry pi, i wanted to invest some time into the external usb batteries that power our phones when we’re out and about.

it’s actually hard to find people who have invested time to decompose such devices but i actually think, it’s worthwhile because you learn a lot. so in this case i invested some time into two batteries to learn how easy / complicated it is to get to the innards: a little 2600mAh battery and a 4000mAh battery both i received as gifts on conventions (thanks techniker krankenkasse and telefonica germany!)

i haven’t documented the blood, sweat and tears process when applying both smart and raw power to the devices, but the 2600mAh by the techniker krankenkasse seems to be a first generation of the anker device i found on amazon.  the second one was really a b*tch. here is the end result: 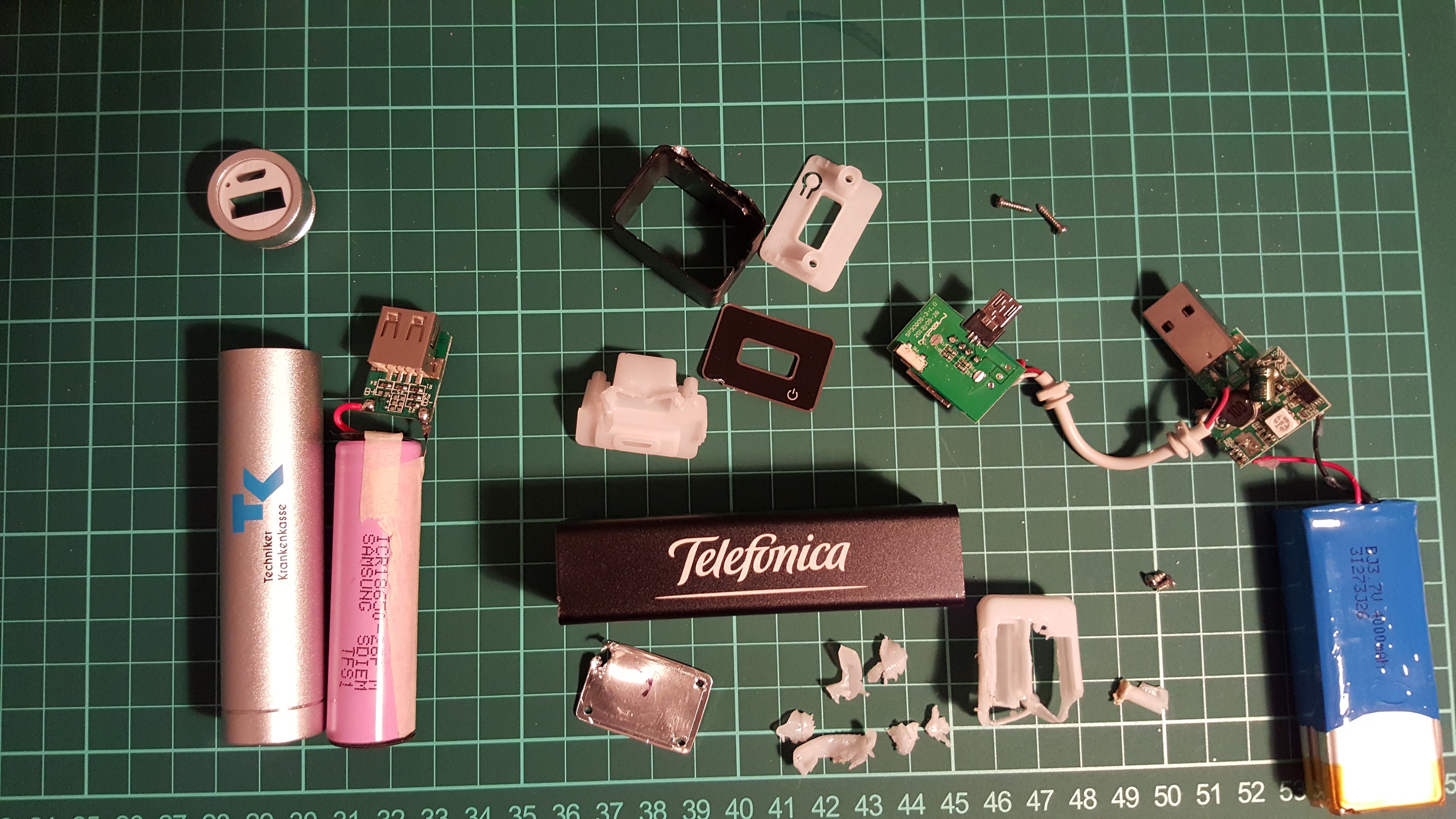 one the left is what i really love mechanically, you just unscrew the cap and get the innards out. SO NICE! however, fully charged, the littly guy puts out varying voltage between 5.03 and 5.12 volts (measured by the usb charger doctor). i don’t know how cool this is for the raspberry pi, especially when the battery is getting lower. measured directly at the battery, you get a constant 4.2 volts, i.e. there is a booster circuit involved that pumps the voltage up to around 5v.

the telefonica guy is a mipow power tube this was considerably harder to decompose and i am really happy / lucky that i didn’t destroy the cables / lipos or electronics. the battery itself is a 4000mAh lipo  with 3.7 volts, and the multimeter is telling so. here, the charger doctor at the usb is showing only varying voltage between 5.11 and 5.12 which is really nice.

so finally, i’ll go for the mipow as it has 4000mAh, more constant voltage and a directly attached micro USB port, so i hope that there’s no further cables i need for the babble pi finally, i’m considering to put adafruit’s ina219 current sensor between battery and the charger logic, but i actually don’t know whether it will survive the charging procedure.

using the ina219, the raspberry pi could sense the battery level and know when to power down. or should i put it between the pi and the battery’s electronics? any suggestions?